The excitement grows at Accumul8 HQ as we get our first bit of press in the Haringey Independent.  Here it is! 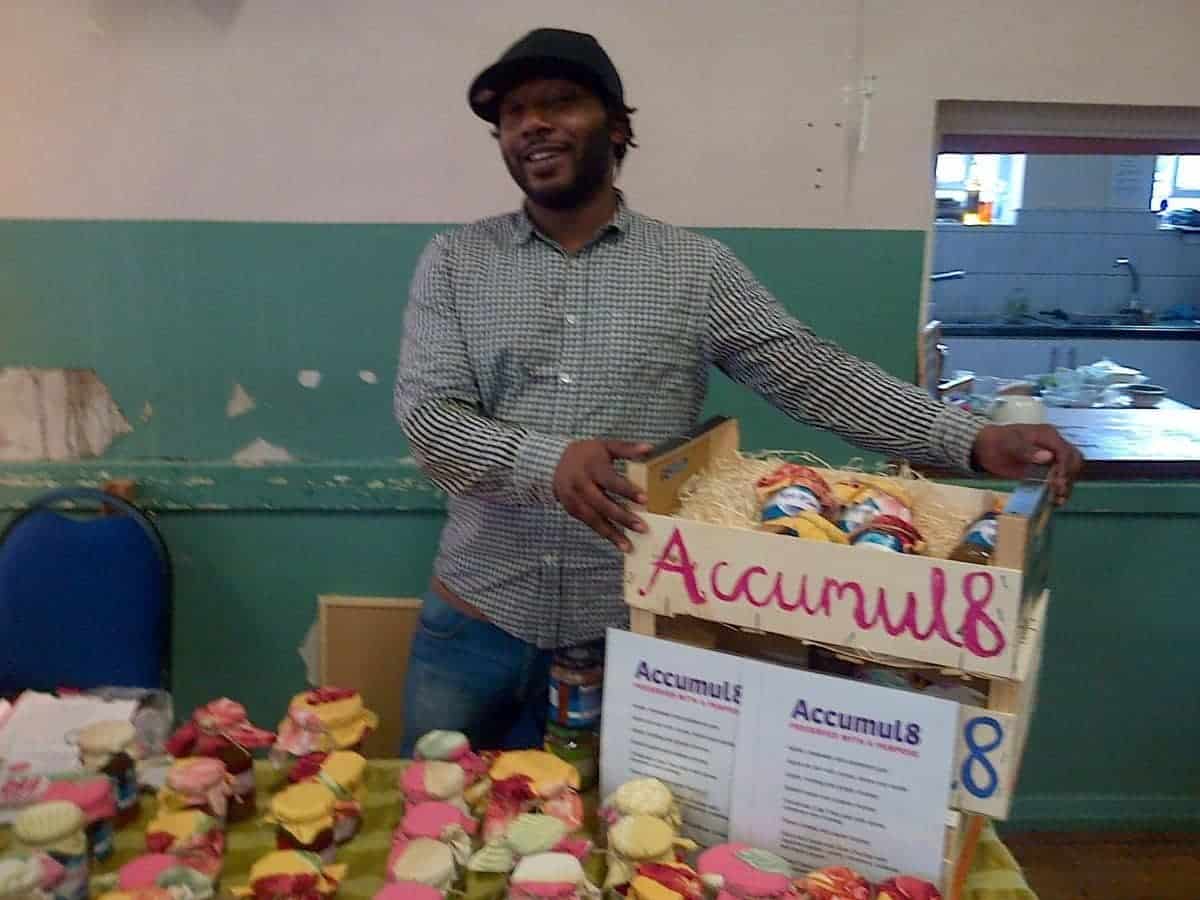 Shaun Ashley with lots of jam

A new initiative is teaching residents at North London’s YMCA the art of making chutneys and jams.

Marice Cumber, of Crouch End, was asked by NLYMCA to help hostel residents break into the creative industries, but realized that she’d have to raise funds.

With others, she formed the group Accumul8, and aimed to raise cash by starting a creative business.

The resulting Moroccan apple and date chutney, apple pie jam and quince jam have proven a hit at the Crouch end Festival, with one record-breaking month seeing 300 jars sold at £5 each.

She said: “This is a project to get residents to learn a new skill, one that’s practical. I wanted us to raise our own money, and not be dependent on grants and things. It’s about moving towards independence.

“I did a bit of a shout out to the local community and asked if they could give us their surplus food, and they just got really, really into it. There’ve been bags of stuff; I’ve had quinces, I’ve had tomatoes – it wasn’t just the surplus food. There were huge amounts. There was an interest in engaging with the hostel.

“We live in one of the wealthier parts of the borough. I think it’s a real shame, we’re in Crouch End with all these coffee shops and there are these people living in a hostel on our doorstep, and we’re not really engaging with them. I think from both ways it’s a real learning curve. This is a privileged community, and we can use our skills to help.”

The group started off making jam in the kitchen of the Holy Innocent’s Church, before moving the YMCA’s kitchen.

Shaun Ashley, a YMCA resident who is now supporting housing officer, has worked on the jam project since its inception.

He said: “Basically, we wanted to get money for creative projects and I was glad to be doing something to generate money.

“I’ve never made jam before getting into this. Making the jams is interesting, when you first make it you taste it so you know it’s going to be sweet, but it’s not jam at that point. It’s llike iquid. After a while it tastes totally different.

“The most rewarding stage is the last one when it actually looks like jam. It’s actually something that you’ve made. The first jam I made – I was elated.

“It’s helped my life along. I’m much happier now. Although I was happy during all the jam-making, too.”

The group hope to sell their jams and chutneys in cafes across Crouch End.

It’s coming, on the evening of Thursday 7th July

We have amazing industry involvement for our upcom

Such lovely feedback to receive from our mentoring

A big thank you to @localgiving @cowardfoundation

Here it is , the invitation to the first ever Accumul8 exhibition!

The Voice, Ravensbourne and an Exhibition update
Scroll to top